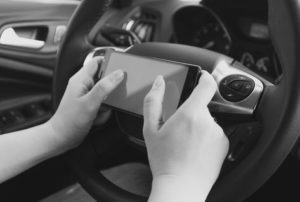 Two separate incidents from this year illustrate how much lawmakers and law enforcement officials grapple with distracted driving issues.

In January, a Cobb County, Georgia officer cited a man for distracted driving because he was eating a cheeseburger while driving, and Georgia has a very broad distracted driving law that prohibits “any actions which shall distract such driver from the safe operation of such vehicle;” prosecutors eventually dismissed the citation due to lack of evidence. The man’s attorney remarked that the charge was “a first for me,” because officers normally only issued distracted driving citations in crash situations.

Then, in late September, California Governor Jerry Brown expanded the state’s cell phone law from a talking and texting ban to a “holding and using” ban, which makes it illegal to stream video, surf the internet, take pictures, and do anything else with a handheld cell phone while driving. Lawmakers boldly predicted that the new law would effectively end distracted driving-related crashes in the Golden State.

Florida’s distracted driving law is much like the old version of the California law, because 316.305 only applies to “texting, e-mailing, and instant messaging.” Furthermore, texting while driving is a secondary violation in Florida, which means that officers must write other citations, such as speeding, if they issue distracted driving tickets. State lawmakers are currently considering several proposals which would add more teeth to the law, but none of them are nearly as broad as California’s “hold and use” ban.

Because of the narrow law, officers may not even issue distracted driving citations in crash situations, unless the tortfeasors (negligent drivers) also changed lanes illegally, ignored traffic control devices, or committed some other offense. So, victims must often use circumstantial evidence to establish liability. Fortunately, there is a low standard of proof in civil cases. Plaintiffs must only prove facts by a preponderance of the evidence, which means more likely than not. So, if there was a call phone within the tortfeasor’s reach at the time of the crash, a jury can conclude that, more likely than not, the tortfeasor used the cell phone.

Other evidence is usually admissible on this point as well, such as statements that the tortfeasor made or the cell phone’s IP record.

Distraction is a factor in about a fifth of the serious injury crashes in Florida. The category covers a wide range of activities, from relatively benign ones like talking to passengers to serious risk factors like cell phone use. Hand-held cell phones combine all three recognized types of distracted driving:

Distracted drivers often cause serious injuries. For a free consultation with an experienced attorney, contact Reed & Reed. From their office in Brandon, Reed & Reed helps clients in Tampa, New Tampa, Plant City, East Hillsborough County and throughout the state of Florida.