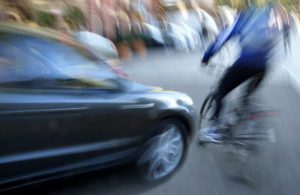 A 42-year-old man will spend at least the next four years in prison after he plead guilty to charges stemming from a hit-and-run crash that killed a fifth-grade bicyclist.

The man hit a 10-year-old girl as he exited a drugstore parking lot in January 2015; the victim was thrown off her bike and flew almost forty feet. She was rushed to a nearby hospital with a serious brain injury and other wounds, and she was later pronounced dead. According to investigators, the driver had two of his own children in the car with him at the time. According to his own testimony, the man panicked, fled the scene, and returned about two minutes later; some witnesses disputed that account and claimed the delay was more like fifteen minutes. Emotions ran high on both sides. Advocates for the victim pushed for the maximum seventeen years. On the other side, many character witnesses came forward for the driver, who is a convicted felon that, according to testimony at trial, has turned his life around.

A Circuit Judge refused to consider the driver’s alleged reckless driving when setting sentence at a maximum seven years, because prosecutors had dropped those charges.

The serious injury/fatality rate is so high because riders are completely exposed to danger in these situations. Vehicle speed is a significant factor as well, because collisions at over 40mph nearly always cause either serious injury or death. Some common injuries include:

In most cases, bicycle-vehicle crashes are exempt from the no-fault law. But in many other kinds of crashes, victims must meet the threshold established in Section 627.737 of the Insurance Law to obtain noneconomic damages. The recognized injuries include:

Family members and legal representatives of victims who do not survive may be able to sue for damages as well.

Vehicle wrecks often cause serious injuries. For a free consultation with an aggressive personal injury attorney in Orlando, contact Reed & Reed. From our office in Brandon, Reed & Reed helps clients in Tampa, New Tampa, Plant City, East Hillsborough County and throughout the state of Florida.